The Free School Meals Own Goal

October 25, 2020
As you're doubtless aware, HMG scored a fairly spectacular own-goal this week, with the decision not to extend free school meals (FSM) over the half-term holiday.
The idea, advanced to tremendous effect by Marcus Rashford, was to ensure that no children go hungry when they're not in school. No one could argue with that, right? If we can all agree on one thing, it's that we're pretty anti-starving kids, right? And at a cost of a mere 20 million quid, which is chump change to a government which has wasted billions on Track and Trace that doesn't work, and hundreds of millions in contracts to their mates for PPE that doesn't work, it was a pretty cheap bit of good publicity.
Well, as it turns out, there's a sizable element of the Tory party (and the wider populace, we'll get to them in a minute) which is pretty pro-starving kids. You may have seen the speech by Brendan Clarke-Smith, the Conservative member for Bassetlaw, in which he spoke about not wanting to "Nationalise children" and asked when it "had become controversial to expect parents to look after their children". Not to be outdone, the MP for Mansfield, Ben Bradley, then started digging the world's biggest hole for himself... 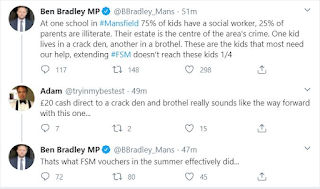 Before deleting it and insisting that h'd "been taken out of context". We know what the context is, Ben, you think all poor people are drug addicts and hookers. That's the context.
Because however they try to dress it up, this policy is all about contempt for the poor. It's about the Victorian concept of "the deserving poor" and the "undeserving poor." In Clarke-Smith and Bradley's worlds, poverty is your own fault. Children are starving purely as a result of the fecklessness of their parents, who are too busy necking Special Brew and shagging each other to cook tea.
Which is odd, as the most recent figures have 30% of children beneath the poverty line. That's either a hell of a lot of bad parents, or something is deeply wrong in this country, which, lest we forget is the world's 6th largest economy. But that's not the party line, and it's not the line of a lot of the electorate either. It's much easier to blame other people than look at underlying structural problems, so this is what they have dutifully done.
Social media's been full of people trotting out recipes for how cheaply they can feed their family. 30p meals, hints and cookery tips. Some of it is doubtless well-meaning, but all of it has at its core the same heartless premise that the Government is expressing more overtly: it's your fault that you can't feed your kids. If only you knew how to cook and shop properly, this wouldn't be a problem.
This ignores the fact that the bulk of children in poverty are from working families, the extension of which is that our economy simply isn't working. It is also completely ignoring the causes of poverty. Housing costs have spiralled over the last decades, a light-touch regulatory system ensuring that rents have increased by 63% in the last ten years. While food remains relatively cheap, housing and utility costs have risen sharply, and it's hit the poorest the hardest.
You can see this in microcosm on the estate where I live. I, a relatively well-off man who owns his own house, am able to shop around for the best electricity and gas prices. I've got good credit and the ability to set up direct debits to make it even cheaper. Someone renting, though, might pay for their power and gas on a card, as it's more convenient for the landlord. The cheapest prepayment tariff is over £1000, significantly more than I pay. I can travel to the shops to get the best prices for food and goods, someone in poor health, or without access to a car, has to make do with the local shop, which is far more expensive. Inequality is baked into our system at every level. The richer you are, the cheaper it is to live. You buy your kids shoes that last three times as long as cheap ones, you buy white goods that last decades.If something goes wrong, you can fix it.
This is what the "but pasta is cheap" merchants on social media don't seem to understand. If you can't pay the electricity, you can't cook the pasta, genius. If it's a choice between heating your home or feeding your family, it's no choice at all. But we're wrapped up in a culture which prefers to condemn. we like to think of ourselves as the product of our own hard work, rather than born into privilege and maintaining the status quo. Yes, I've worked hard for what I have, but getting the start I did in life put me ahead of the game. A stable home, a good education, the chance to go to university where I met someone who was similarly well set-up, meaning the two of us have been able to build a good life. Simply telling poor people to learn to cook isn't enough to overcome the hurdles which have been placed in their way before they've even got going, and it's disingenuous to suggest otherwise.
This is why Rashford's campaign has been so successful. He has asked a simple question, shorn of politics. It is this: "do you find it acceptable that children are going hungry in this country?" The Government's response has been flat-footed, attempting to turn it into a political football. They've tried blaming Labour. Tried to say "it's not as simple as that" because any admission of the scale of the problem is also one that, after ten years of disastrous Tory rule, this is one of their making, and one that is getting worse.
P.S. To this end, while I'm here, I should like to point out that my own pub, The Kicking Donkey is offering free meals, no questions asked, to anyone who needs them this half term (and, most likely, beyond). Simply email me at kickingdonkeypub@gmail.com and I'll sort something out.

Popular posts from this blog

Just let us enjoy it for five minutes, yeah?

November 09, 2020
He lost! The moment that most sane humans have been fervently praying for for the last four years has finally arrived. After an interminable period of watching numbers fail to move, more "Key Race alerts than I've had hot dinners, and much marvelling at the seemingly iron constitutions of all at CNN, the news was finally confirmed. And lo there was much rejoicing across the land. You'll have your own favourite bit, no doubt, Personally for me it's a toss-up between Nigel Farage losing a ten grand bet and the hilariously shambolic, bathetic ending, where a confused Rudy Giuliani, thinking he'd booked the Four Seasons Hotel for a press conference, stood blinking in the car-park of Four Seasons Total Landscaping, between a crematorium and a shop selling dildoes.  I am not by any stretch much of a US politics nerd. I know that most UK politics fans have a slightly dorky obsession over the US process which probably stems from watching too much West Wing , but it's s
Post a Comment
Read more

October 29, 2020
In among the various examples of David Cameron being a pillock in her hugely entertaining diaries , which caused a minor furore a few weeks back, the otherwise spectacularly un self-aware Sasha Swire made one hugely telling and perceptive point, described here in Rachel Cooke's excellent Guardian  interview  Following a Downing Street Christmas party in 2011, for instance, she notes that the closeness of Cameron’s circle is “unprecedented… a very particular, narrow tribe of Britain and their hangers-on”. It’s “enough to repulse the ordinary man" This sense of Government by chumocracy was one of the less edifying aspects of the already pretty ropy Cameron years. An idea of a few good pals lording it up at each other's houses and doing a spot of Governing when it suited them haunted the back of a fag packet policies of that intellectually threadbare period (in the book, Dave boasts of "winning a war" in Libya, conflating it with the great day he's just had on t
Post a Comment
Read more